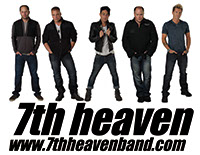 7th heaven is an experience you just have to see and hear! 7th heaven has charted #1 on the Midwest Billboard Charts four times in recent years. Heard on numerous major radio stations with their hits "Beautiful Life",  "Time of our Lives", “Stoplight”, "Better This Way" and "Sing".  Also known for the famous "30 Songs in 30 Minutes" medley of cover songs from the 70's and 80's, 7th heaven has been an entertainment staple for 33 years. Playing around 200 shows a year, with an average of 100 outdoor events; 7th heaven is one the busiest festival band in the world. 7th heaven has earned the right to say ..."We've seen a million faces and rocked them all!"

• Recognized as one of the biggest independent bands in the world

• Packs venues across the Midwest U.S.

• 7th heaven’s music has been heard on MTV

• Six songs are in the film “Lizzie”

• One song in the film “Light Years Away”

• Seasoned artists that have performed with many major label artists

• Performed on the “Mancow’s Morning Madhouse” radio show to over

A Division of NTD World